What is Pruning the vines? Importance & Methods

What is the pruning

Because the vine is a liana, it must be pruned and trellised to produce always more fruit than wood. An unpruned vine will offer numerous grapes, but small and acidic, not exploitable to produce a quality wine.

Pruning is the main activity in winter during the vegetative rest of the vine, is manual and takes place from December to March.

But beware! The earlier you prune, the earlier the buds will hatch, bringing risks of frost. The winegrower proceeds to what is called dry pruning. It is a long work where 80% of the shoots are eliminated. Traditionally, it is done using mechanical pruning shears with one or both hands.

Today, technological advances have brought winegrowers electric pruning shears with a portable battery that allow them to increase the force tenfold and to prune with one hand.

Pruning therefore consists of removing the useless wood from the previous year and preparing the future harvest by guiding the growth of the vine stock.

Do not forget that a vine stock is alive. It is necessary to know how to observe and analyse it in order to adapt the effort that will be required of it, in particular by forecasting the number of bunches for the coming year. Pruning is the essential factor in the search for quality.

* We speak of short pruning when we leave only 2 to 3 eyes per shoot.


Why to prune the vine?

1) to fight against natural development of the vine in length causing an exaggerated lengthening of its branches. This is called acrotony, the tendency of the vine to feed its buds close to the top with sap.

2) to control by pruning the number and volume of the future bunches in order to have an optimal harvest and ripening.

3) limit the number of buds to adapt the vine to the possibilities of the environment. To have a suitable vigour and to ensure the perennity of the vine. But beware, excessive pruning exhausts the vine!

In conclusion, pruning must be adapted to each vine stock according to its general condition. If it is vigorous, it will be able to support a greater load of grapes. If it has an average development, a light pruning is sufficient to help it regain enough strength to give its best potential the following year.


The most common pruning styles

There are many different styles of pruning in France and around the world. Wire driving, which has gradually replaced trellising on stilts, can induce different forms of development and involves different types of pruning.

First of all, let us specify that 2 pruning styles can be practiced :

The pruning also differs according to the type of vine (low or high). The most common are :

Guyot pruning
of the name of its inventor. It is carried out on trellised vines. It is a quick and easy pruning system. It is ideal for grape varieties whose maximum fertility (number of bunches that the bud will give) is on buds of high rank on the vine shoot, chardonnay or pinot blanc for example. But this pruning is exhausting for the plant because it requires a lot of energy to make all the buds of the stick bloom. Often, the maturity of the harvest lacks homogeneity. There are two variants of pruning known as Guyot pruning:

The simple Guyot has a long wood (with 5 to 8 buds) and a spur (with two buds). The cane will be formed by the upper shoot and the spur by the lower shoot. A wire trellis is necessary for this pruning system.

Double Guyot: the vine stock is structured with two arms each carrying a spur and a long wood (rod) whose length varies according to the vigour of the grape variety. The cane will be formed by the upper vine shoot and the spur by the lower vine shoot. Wire trellising is also necessary for this pruning system. It is practiced in the Bordeaux region, the South-West, the Loire, Champagne, etc.).


A summary of the different sizes in Guyot
- Burgundian single Guyot: with a two-eyed spur and, a little higher up, a rod with about six eyes ;
- Bordeaux double Guyot: with one or two spurs and two flat rods;
- Guyot double (for tall vines): with two spurs and two arched rods, with ten to twelve eyes;
- Mixed Guyot: 1 rod with 6 to 8 eyes on the left and one spur on the right, alternating each year;
- Mixed Nantes Guyot: 1 rod and 2 spurs spread over 2 or 3 heads.
- Guyot Poussard: single guyot waist with 2 arms, one of which carries a spur and the second carries a stick 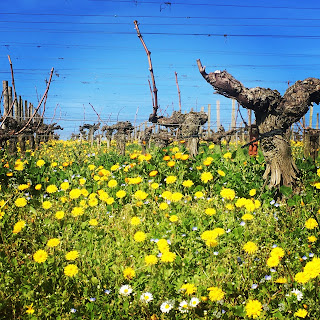